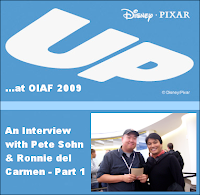 At the OIAF, I had the pleasure of a 15 minute interview with Ronnie del Carmen and Pete Sohn from Pixar. The first part of it is here now. I am dividing it up for length constraints.

First off, this is a question for Ronnie del Carmen: What was it like getting to do a tie-in book for the film (My name is Dug)? Oh that book - that was amazing. When they were looking for an illustrator for the book, I actually thought someone was already drawing the book. Because I was part of making the movie and being at Pixar means that we get to oversee all of the books, kind of that get made, and I thought that someone was already illustrating the book.

But then they came around and asked, 'Do you know anyone who would be illustrating this book? Because the people we were thinking of, didn't make the book'. Then I said, ‘but what if I made the book?’, and they were like, ‘That would be awesome! -Wait a second... you already have a job, you're trying to finish the movie!’ So, I said to them, ‘What if... I'm really good... and I work nights, and this movie's almost done anyway, right? So I can probably find a window’, so I asked the people at Pixar to work up a schedule, that actually in the best way, I could possibly do it. So they said, ‘Your part of the movie could be done right around here, you can start making the book right about there, everything's going to be fine.’

Of course, it didn't happen that way, the movie ran right over that, I was working on the third act, and then I was working late nights on the book. But I was really happy to make it. I was really happy to be part of it. Kiki Thorpe, who wrote the book, was very collaborative. We went back and forth, and created the pages together - it was fun! I want to make another one.

Next is a question for Pete Sohn: When did Partly Cloudy get greenlit as the short film? Greenlit... What is it now, this is October, so it was must of been around two years ago. Greeenlighting, it's not like an ‘ok’, it's kind of in sections, ‘ok this is a good idea, move onto the next one, let's see how do you build a story... ok that's it, keep going’. So it was kind of always like a slow crawl to get going.

...and how long did you have for the short film to be made?

It was about a year of production, from beginning to end, of pitching it and everything. I was pitching other ideas though, that maybe added about a year and a half to the process.

Now a couple of questions for both of you: When did you know that you wanted to work in the art/film world? Pete Sohn: It felt like I was kid, like I always wanted to do these comics, but watching the Disney movies as a young, young lad, I was like, oh what is this, I don't understand this magic, and I found, you know, one of those 'Illusion of Life', like a flipbook. In that corner of that book, there was like this little corner that has all that animation, and I was really like, oh my God, this is something you can do? It was really then, I don't know what age I was, I was a young, young kid.

Ronnie del Carmen: I didn't really know anything about moviemaking. You watch cartoons - I watched cartoons when I was a kid - I mean everybody watches cartoons. So, I watched 'The Wonderful World of Colour', and I was the happiest kid. I never thought about animation as something you could do - I didn't even think of that people make those. I almost felt cartoons just happened, when I was a kid. Only when I got to the US, and I was already an old man by then - I was 29 - and I fell into animation, not really wanting to be in animation at all, and that's only when I really understood that you can make this character move and behave, show the emotions, and I thought, hmmm... I could do this. I could learn about this! And for me, it's just magical when I found out the components of how to make them.

Did you study animation? Ronnie del Carmen: I didn't really study it formally, I learned that on the job. I studied fine arts, and majored in advertising art, to be an art director. I wanted to be an art director, for print, tv, magazines, and for movies. I did like ads, posters, but I learned how to be part of an animation studio by being part of an animation studio to learn in...

Pete Sohn: I went to school for it, I went to CalArts, after highschool. I got into the school called California Institute for the Arts for four years, and learned as much as I could, just scraped traditional 2-D animation then got my start there, and then was slowly learning on the job, the story side of it. But animation, that was all the training I had.

UP NEXT: An interview with Ronnie del Carmen and Peter Sohn - Part 2...

Just a couple of the questions in the next installment include: 'What would you suggest for people who want to go into art for animation?', and 'What was it like seeing both Partly Cloudy and Up for the first time with an audience?'.