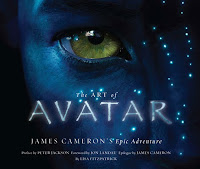 - This review is in a series running this week and next, leading up to the Oscar nominations on Feb. 2nd. The series includes a profile of 8 books relating to past and present films, as well as the filmmaking process. Check out these titles to get a better understanding of what goes into the art of film.

The Art of Avatar Book Review By John C.

The Art of Avatar is a beautiful visual companion to the film that everyone’s talking about. With full-page concept photos, and descriptions of each of the creatures, this make for a very interesting read, no matter what level of obsession you have for the film.

It’s very interesting to see how the look of all the creatures, including the Na’Vi, has changed to finally become what we see on-screen. It also gives us a very nice insight into the groundbreaking special effects.

The Art of Avatar Book Review By Erin V.

James Cameron’s Avatar is breaking box office records, and looks to be on it’s way to several Oscar nominations, including Best Picture, this Tuesday morning. Whether or not it deserves to win the grand prize has been debated by many, but the one thing that most can agree on, is that the film is visually stunning and would deserve a design award.

The world of Pandora created for the film is certainly a visual achievement, one that is accentuated in The Art of Avatar. What I really found amazing about the film, was not so much the animation process, nor the 3D, both of which were astounding, but rather, the design process. A fantasy film like this, if not designed properly, will fail. Had the designs for the moon Pandora not been done with such precisional trial and error, I don’t think the film would have succeeded like it did. You see, the story of Avatar in itself is fairly classic in it’s nature - it is for the visuals that we are captivated largely into this world.

The use of colour and translucency here is what really makes it so visually appealing. That, and the creatures and plants in the world are both new and familiar at the same time - another fine balance a film like this must find. As this book shows us the design process from early concept sketches to almost finished computer renderings, we can really come to appreciate what the graphic artists have done for this film. This is definitely a book that anyone into Avatar, or the art and graphic design world, will enjoy immensely.

To find out more about The Art of Avatar, or other books, visit Abrams Books’ website here.