Little Mosque on the Prairie: Season 3 on DVD Today 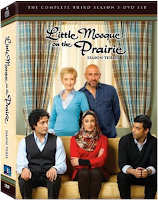 On September 15th, E1 released the second season of Little Mosque on the Prairie to DVD. Today, they are releasing the 3rd season of the show. This three-disc set includes 22 episodes, plus bonus material. It’s available to buy at most stores.

Though the show never reached a level of greatness, it was usually a reliably good, enjoyable and suitably Canadian half-hour. That is until it reached its pretty bad fourth and current season, which has few laughs and a “Thorne” in it’s side.