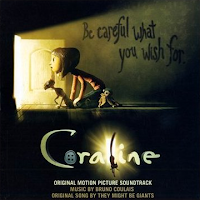 The music of last year’s animated masterpiece, Coraline was one of the elements that really helped make the film work as well as it did. I had the pleasure of speaking with the composer of the music, Bruno Coulais, just over a week ago. The music of Coraline is nominated for Best Score at upcoming Annie Awards - winners will be announced February 6th.

In the interview, we spoke about everything from the collaboration process on films, to working with animation. Enjoy reading it below.

When did you find out that you would be composing the score for Coraline? It was one year before the shooting. The director, Henry Selick, tried many different types of music, and I composed for Winged Migration and he found that it worked. I was very happy.

Have you done other animated movies? Yes, I did an animation in French, I don’t know exactly the English title, but it’s really a beautiful movie.

What was it like watching this film come together? I love animated movies. You have time to work on it, and change different things. On Coraline, I had about one year. First of all I started to find melodies and after that, I recorded some of them and my work was in progress.

Did you get to see part of the animation process? Yes that was very important. I came twice or three times. It was really interesting for me, since I worked a lot of time in Paris. This was not a big problem, I worked very closely with Henry. I would send via internet the clips and it was a very strange, but very close relationship. He would say what he wanted, what he would prefer in each sequence and I would work on it.

How late in the project did you finish - you did the orchestration as well, right? I remember the real shootings finished very late and it was so important to see the light of the movie - the atmosphere. Regarding the orchestration, I’m writing my own, waiting until the last moment, two weeks or one week before the movie was called.

When did you know that you wanted to compose music? When I was very young - I have a real patience for music. My mother and father played piano. I have a good ear, and started very, very early. I couldn't imagine a life without music. When I was 18, I recorded my first music for a film about Mexico in French - it was called México Mágico. It was by François Reichenbach, who was a very interesting director. I started with the documentaries and try to bring in more fiction, but for documentaries, Winged Migration was a very good one.

What do you find you like about a fiction like Coraline? I think it's very interesting doing music for Henry Selick. I’m really very happy to work on such a movie from France. I'm very lucky to work on a lot of French movies that are very realistic, but with Selick and Coraline, a fantasy, I could write very strange music, so that was very interesting, very freeing.

What were some of the instruments that you used in particular for Coraline? Actually the harp, and I used a lot of different big orchestral pieces, as well as a string quartet, stranger ethnic instruments, and synth, so it's a mix of those, and also voices are used.

What instruments do you play? I play violin and I play piano, but my main occupation is to write music.

Where did you learn to write music? I worked and I learned classical from very young. I started to compose for movies, and I went to a very good school. Very early I opted to write for orchestra. I had the classical education from a very good school in Paris for piano - very famous.

What are your favourite types of film to write for? I love the fantasies. I think it's good for music - I'm not too found of too realistic, not so gifted for comedy... I love the mysteries, very free to write for.

What was Henry Selick like as a director to work with? I think that he is a very good director, and the fantasy stories he tells, like Nightmare Before Christmas are very good. Since the beginning with all of the movie, he knew exactly what he wanted, but left me very free to write. Really, it’s kind of like the music of Henry, he very much knew the sounds that he wanted.

What are your thoughts on your Annie award nomination? Yes, those awards are at the beginning of February. I'm very proud of it, and this is an important movie in my life as a professional writer.

Have you seen any of the other films nominated there? Just Up, which is beautiful too, but I don’t think that I’ve seen any the others yet.

What is the composing process like for you? For me when I think about the melodies in my head, it always begins with the sound of the instruments - I am unable to imagine an abstract song, so the process of the orchestration in the beginning is an idea. It's very close to an instrument.

Do you have any instruments that you like to write with a lot? Maybe I think I like to write strings. I think it’s important to play violin if you are going to be writing for strings, since there are a lot of ways to play with the bow, and it’s good to play piano, since it's important for the harmonies. When I'm composing I am composing in my head, because if I compose at the piano, I always do the same thing, like my fingers are doing the composing. For me, I have to imagine the music in my head, and write the music from there.

Do you use the computer to do the writing? I use Finale - it's very useful. If I write for music on there when there’s anything to change, it's easier to change the orchestration. And for the demo’s, I use Logic Pro and I think that it's very great because you can record good demo’s, which are precious for the director, because it gives a real idea of the definite music. It’s like real instruments there, kind of.

What was the collaborative process for Coraline like? Yes, when I would send in the demo’s, very firstly he answered me, and it was magic for me because we were so far apart in distance and the relations were so close. So sometimes he asked me to change some details. First of all, I remember I sent to Henry all of the main melodies and after it was easier to work off of. I worked with the themes, and the music for the movie is different at the beginning, since little by little the movie answers the music as it gets a little scary at the end.

Where was the music recorded? In different places. First we started with the France children's choir in Paris, then we did all the soloists in Budapest and the orchestra, and we mixed it for the film at the Skywalker studio in L.A. - it was an amazing experience.

When did you first see the music really with the film? It was at Skywalker, reel by reel, and after really the first time was for the premiere. That was the first time I had the distance.

What is it like to be seeing a film with your music in it? I try to focus, but it's my music. But, the two mixes of the thing was so good that I focused very quickly. It was very fascinating to be seen with the new colour of the 3D. It was new as I had not seen a movie like that. And I think when you would work a long time on a film, it's only when you watch it with an audience that you really see it.

Do you use clips of the scenes when you are composing for them? Yes, for example if I am working on a sequence, I watch a long time the sequence and then try to forget it and compose from memory. I imagine when I write something, then I re-watch the sequence and change something and then record the demo. It's important to write with the memory of the sequence. When you are composing the music, sometimes I think the memory is stronger and more important than actually seeing.

Is there anything else you’d like to add before we wrap up today? I was pleased to talk with you. For the last time, I think that Coraline was a great, great experience and I will have very many good memories of it.

Thank you to Bruno Coulais for taking the time to speak with me today. The Coraline soundtrack is available in stores, as is the DVD. You can read our reviews of the film here. The Annie Awards, where Bruno Coulais is nominated for Coraline’s score, take place on Saturday, February 6th, 2010.

His music is spiritual!!!