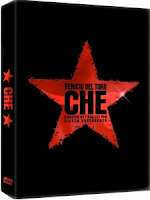 Today, E1 Films is releasing both parts of Steven Soderbergh’s epic bio-pic about Ernesto “Che” Gueverra, on DVD and Blu-Ray. This is the first time that both films are available to buy as a set. We reviewed Che: Part 1 - The Argentine and Che: Part 2 - Guerrilla when they originally came out on DVD on August 4th. Our consensus was:

"While it would be to hard to take in one sitting, when both Che films are viewed separately they make for fascinating bio-pics of Ernesto "Che" Gueverra. ***1/2 (Out of 4)"

This set also includes 74-minutes of bonus features, including interviews with the director (Steven Soderbergh), star (Benicio Del Toro) and composer (Alberto Iglesias), as well as one with expert on Che Gueverra, John Lee Anderson. It also includes a featurette about Che.